Remarkable Healing on Our Dog Deannie 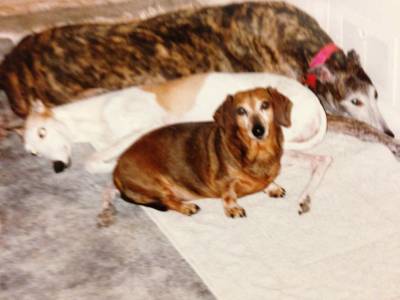 Just the other day my husband and I were talking about our three dogs who have all passed. We laughed about all the wonderful times we had with them --- all the wonderful moments that were so meaningful to us.

I’d like to share a  healing story that was quite remarkable for my husband, Drew, and I to view.

In the late eighties, Drew and I went to animal control and fell in love with a miniature dachshund. The vet who was working there at the time told us that he had been on a breeding farm and was found wandering along the side of the road, and that several people wanted him until they found out his age, which was approximately 9 or 10.

I can still remember seeing him laying on a piece of carpet, maybe twelve by twelve, and shivering. My husband opened the gate and said to him, “Come on out little guy”. He didn’t look very well, but walked right over to me. As I knelt down to pick him up, it was as if he clung to me, and I could tell he was so scared. The vet said that they had pulled numerous teeth and that he had other health issues. She also said that if we wanted him we better take him because he was going to be put down in the morning.

Well, of course, nothing more had to be said. He was going home with us. We named him Deannie and also called him “wild man.” The first few days he settled in and seemed quite happy. I know we were. He had a very calm disposition, and the only word to describe his presence was pure joy. 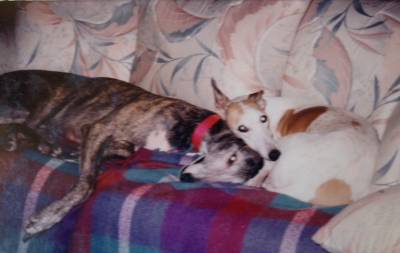 At the time, we had two females, Hart, our very playful, dainty whippet, and, Missy, our beautiful, sweet greyhound, who were both adopted from the SPCA. Deannie would take care of them, cleaning their ears and licking their teeth. For many years, they were all the best of friends until one evening when Deannie and Missy got into a fight in our kitchen. I heard little growls from Deannie, and when I got there, he was running around the kitchen. Missy looked upset, and Deannie had blood dripping from his mouth. There was an area in the kitchen where both of them liked to sleep. I can only assume that Deannie may have startled Missy while she was sleeping, or they possibly got into a fight over their favorite place in the kitchen. I felt so bad for both of them because I know what was done could not be undone.

I rushed Deannie to the vet and he told me he would check him out and give me a call. In the meantime, I called Drew at work, told him what happened, and he came right home. We were both so worried.

The vet called that evening and told us that Deannie had a broken jaw and would need surgery. He was concerned about his bone loss and age, at the time 18 years old. 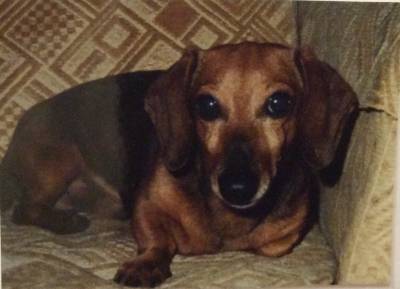 That evening Drew and I had a session with spirit. Dr. Robert came and assured me that everything would work out fine. I asked him if Deannie could withstand the surgery especially because of his age and bone loss. He explained to me that the vet  would do the surgery, would not be happy with it, and would redo it again. He also told me that he would guide the hands of the vet on an energetic level, even though the vet was not aware of him or our work. One of Dr. Roberts colleagues in spirit, nurse Ruth, would also watch over Deannie throughout the entire healing process.

The next morning when I spoke to the vet he told me exactly what Dr. Robert had said the night before. He expressed that he did the surgery, didn’t like how it turned out and redid it.  The second surgery was better, but he had concerns about the wires in his jaw holding because of the extreme bone loss.  If Deanie couldn’t eat or drink water, he said the only alternative was to bring in a specialist who would build an acrylic jaw.  Drew and I would be devastated to be without him, but we would have never put him through all of that trauma. One cute statement he relayed, “When that old fart came out of the anesthetic, he started to bark at a bird in a cage across from him. He’s really something!” Drew and I both said, “That’s our Deannie!”

We couldn’t wait to pick him up. When the vet brought him out into the waiting room, he was so excited and happy to see us. His jaw was still quite crooked and, he had very few teeth, so his tongue was slightly hanging out of the side of his mouth. He hadn’t had any water or eaten any food while he was there, and we were in such hopes that he would be able to drink and eat once he began to heal. When we pulled into the garage, he knew he was home. I picked him up, put him on the floor, and he ran over to the water bowl. I can’t tell you how that felt, something so normal was like a major revelation to us. 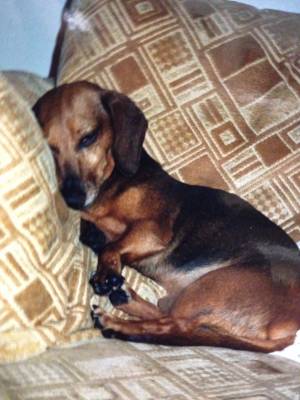 Dr. Robert and nurse Ruth told us to have a healing session for him every evening. We followed his instructions and would see some improvement each morning. Then one evening during our session, the third day after the surgery, Dr. Robert asked me how I thought Deannie looked. I told him I was so grateful that he was eating and drinking and that he looked so much better even though his jaw was still crooked. Dr. Robert replied to me, “Tamara, if you think he looks good now, wait until you see him in the morning.”

Well, the next morning was certainly something to see. His jaw was completely straight, and he was back to his old playful self in such a short time. We had a session that evening and I thanked Dr. Robert and all the colleagues that helped in his healing. He explained to me that healing can take place very quickly because of an animals unconditional mind and that Deannie wasn’t ready to pass, and desired to stay with Drew and myself. It wasn’t his time to go to the ethereal world.

Our family in spirit always says, the will of a soul, mother nature, and one’s destined path all play a part in a healing process. Because of spirits remarkable energy work, and Deannie’s will, Drew and I had four more wonderful years with him. The wires in his jaw held all that time without one problem. He was happy and healthy, and when it came time to pass on, he passed exactly the way spirit said he would. His body simply shut down at the age of 22.  How fortunate we were to have him all those years!

At the time of his passing, Hart was 16 years old. She was with us for one more year, and then three years after her transition, Missy passed on, both of them at the age of 17. Even though it was difficult to let them go, we know their spirits are with us, and we know we will be with them again.

The loss of our pets is like losing a piece of our hearts, but we do heal. We reflect on all the wonderful moments we spent with them, all the joy they gave to us.

After Missy's passing, Drew and I decided to wait a while before adopting another pet, but within a short time, two adorable cats, Hubert and Bell, came to our home and decided to adopt us. We couldn't be happier! 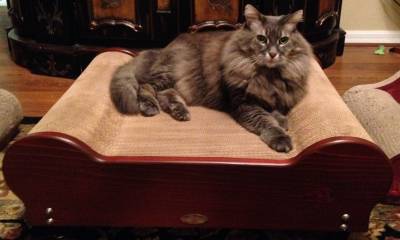 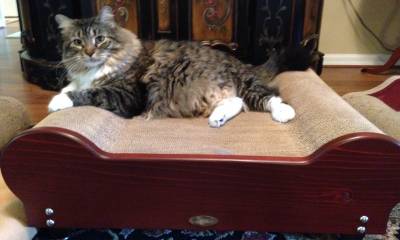 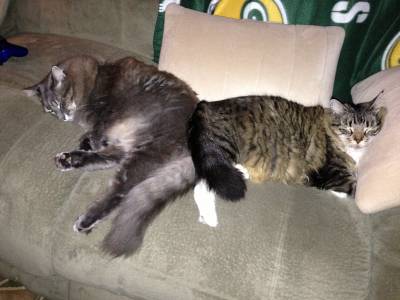 "Confrontation gives us a challenge, gives us an opportunity and gives us a way to show passion."